When outdoor grassroots football returned in September 2020, all thoughts were to complete the football season. However, this was not to be as by early November we would enter another Covid Lockdown that was to last through the Winter with all grassroots football cancelled.

Mike Hames, Chairman of Shropshire Junior Football League said: “It was not until April 2021 that outdoor grassroots football was allowed to restart under strict Government and FA Covid-19 Guidance.

Now came one of, if not the biggest challenges to Shropshire Junior Football League in its 47-year history.  How, when, what and where could the league implement a fixture programme across all 192 teams.

With only a few games played last October, the league management took the decision to null and void the league programme and concentrate on a Charity Cup competition.

With unquestionable support from The New Saints FC (Park Hall Stadium), Market Drayton Town FC and Shrewsbury Town In The Community, they all agreed to host a festival of finals.

Having now reached the ‘The Festival Of Finals’, the league have raised £3,022 in total. The Shropshire Junior Football League pledged £500 from charity funds reserves plus the gate receipts from Charity Cup Finals hosted by The New Saints, and donated a grand sum of £937 to Oswestry and Borders Foodbank. 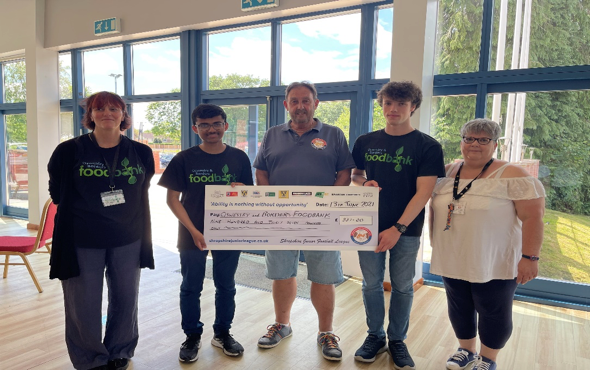